I've decided to mothball "Longrange" and move to "Always On Watch".

You will find my currant posts and comments there along with my Christmas post which will be published on 12/ 23/16.

You can Email me at longrang(at)gmail.com which will be forwarded to me.

All the best!
Warren There was a knock on my front door which startled me awake. My dogs were barking which required my dire threats to quieten them as I answered the door.

Maybe you have heard of our weather and the unusually cold temperatures and large amount of snow that has fallen in the last 24 hours. I live just south of Interstate 64 in Southern Indiana and you may have seen the news about the closed Interstate and stranded motorists on the national news.

A man in his early fifties, about my own age, stood at the door. He was wearing tennis shoes, jeans, a field jacket and sock hat. His glasses were frosted and his pale white hands and reddened knuckles attested to the fact that he wore no gloves.

He told me he was lost and asked for directions to a certain address. I told him that he missed his mark by a mile and a half and asked him where his car was. He said he was walking.

I invited him in and sat a chair for him by the warm air from the furnace vent. He was shivering uncontrollably, a faint whiff of alcohol was on his breath. I asked if I could fix him something to eat. He refused but accepted a cup of hot coffee.

My wife talked to him as he warmed himself and I could hear him speak as I prepared his fresh coffee.

My son heard his voice and came into the living room to sit and listen, and to watch, just in case.

He was homeless, he had been sleeping under a bridge over the river several miles to the West. He had decided that it was too cold and he might freeze to death if he didn't find safe shelter with more than cardboard boxes to keep him warm. About midnight, he had left his meager possessions and headed for his sisters home, a mile or so from my own home. He had walked past in the blowing snow, wind and the dark but continued forward. He was lost, confused and probably somewhat drunk. Hypothermia can add confusion to even the sober mind.

As he spoke, I realized that he had mental problems as do many of the homeless.

There are places that provide refuge for the indignant, I'm sure he knew, but they don't accept anyone who is intoxicated; which I'm also sure he knew.

He drank his coffee then asked me if I would drive him to his sisters house. He then offered me two dollars. Of course I refused the money but offered to take him where he wanted to go.

I intended to take measures to see after him and he seemed anxious to leave.

As I drove, he told me that his sister was out of town but he had permission to use her house in an emergency. I was worried that he was just lying for reasons of his own but I was determined to see the thing through, even if I had to call the police to ensure his well-being through this cold weather.

As we drove up to the house, there was a porch light on and smoke coming from the chimney vent. Even so, it was apparent that there was no one home, the snow around the house was undisturbed.

I asked him if he was sure he could get in, he said, "Yes, she (his sister) told me where the key is." He reached out his hand, as if for a hand shake, and when I offered mine, pulled my hand to his lips and kissed it saying, "God bless you".

I was profoundly embarrassed but stayed long enough to see him dig around in the snow and find a key, unlock the door and wave goodbye.

I drove home, my thoughts disturbed, by the events that had taken place.

My wife was relieved as I returned and I started preparing food, (very early,) for Christmas Eve. As I cut up fruit for salad and prepared the turkey for baking, my son came up behind me, hugged me and kissing my head, said, "Dad, you did a good thing."

Again, I was embarrassed, not by my son's hug and kiss but by his praise.

It was the right thing to do.

My son told me that he tries to help the homeless ones that hang around his place of employment. We spoke of how little we can actually do for them and I was proud of my son for being a good man and doing the right thing.

As I continued to prepare food for Christmas Eve, my thoughts drifted to a couple seeking shelter in Bethlehem and the birth of the Lamb of the New Covenant, and I felt God's Peace.

May God's Peace and blessings be with you all!
Merry Christmas.


Oh, come, oh, come, Emmanuel,
And ransom captive Israel,
That mourns in lonely exile here
Until the Son of God appear.
Rejoice! Rejoice! Emmanuel
Shall come to you, O Israel! 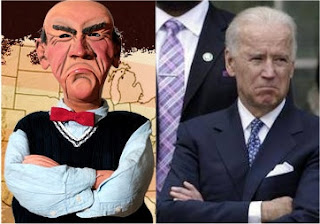 Sorry, I couldn't resist the temptation. I ran across this picture of Joe Biden at some presidential function and started laughing at the resemblance.

In case you are unfamiliar, the one on the left is Jeff Dunham's ventriloquist dummy, Walter the retired grouch. The one on the right is a different dummy.
Posted by Warren at 9:16 PM 11 comments:

More of the Pup 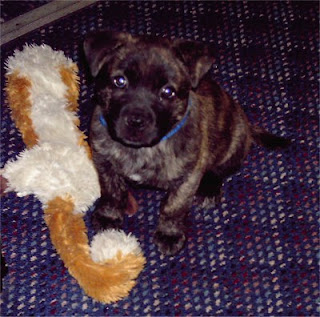 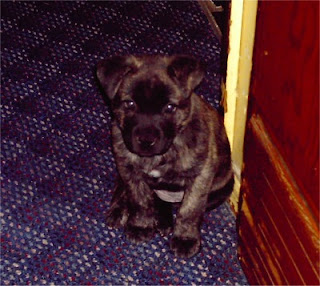 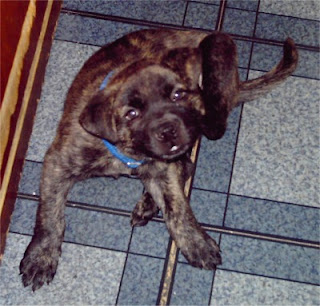 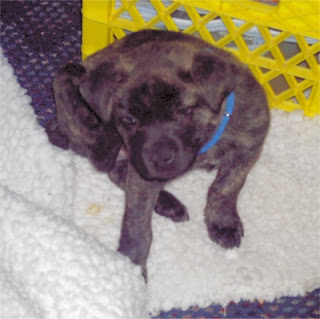